Bob Clones were NPCs during the Terwilligers 2015 Event that gave event currency to get prizes. They appeared on the streets of the Player's Springfield and their Neighbors' Springfields. When the player tapped them, they earned event currency. Rewards could be increased by upgrading the Herbicide Squirter.

There were two different ways to collect rewards:

Bob Clones appeared in three random skins. However these skins had no difference except for the look. 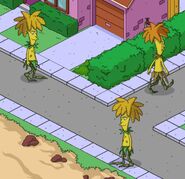 Add a photo to this gallery
Retrieved from "https://simpsonstappedout.fandom.com/wiki/Bob_Clones?oldid=182553"
Community content is available under CC-BY-SA unless otherwise noted.