Blue-Haired Lawyer is a premium character introduced with the level 38 update. He costs 90 donuts, and is a part of the Legal Eagles collection.

Since April 2015, he can be obtained with a Mystery Box, which makes him rival Squeaky Voice Teen and Kearney as the easiest premium character to get for free.

The Blue Haired Lawyer is Springfield's most prominent lawyer known for his pasty face, blue hair, and nasal New York accent. He is one of Mr. Burns' lawyers. Many times, he has shown up when the Simpsons are in court (usually on the opponent's side) and quite often makes good points and wins over the judge.

His most prominent client is Mr. Burns, but he has worked for Fat Tony, Disneyland, the Sea Captain, the Frying Dutchman, Sideshow Bob, Roger Meyers Jr. and the Itchy & Scratchy Studios, Movementarians, the estate of Charlie Chaplin and the estate of Jimmy Durante, and even his past and occasional rivals, The Simpsons!

When obtained with a Mystery Box. 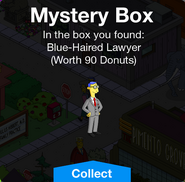 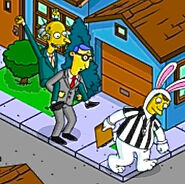 Add a photo to this gallery
Retrieved from "https://simpsonstappedout.fandom.com/wiki/Blue-Haired_Lawyer?oldid=256802"
Community content is available under CC-BY-SA unless otherwise noted.