Tree-hugging: +100
The Bleeding Gums Cloud is a limited-time decoration that was released on August 21, 2019, as part of Act 3 of the Simpsons Babies 2019 Event. It was the second prize to be won in the event's Act 3.

It is the spirit of Bleeding Gums Murphy who communicates with Lisa from beyond the grave. 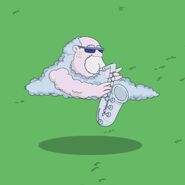 2019 game bug
Add a photo to this gallery
Retrieved from "https://simpsonstappedout.fandom.com/wiki/Bleeding_Gums_Cloud?oldid=253405"
Community content is available under CC-BY-SA unless otherwise noted.