Beer Stein Wiggum is a premium limited time costume for Wiggum released on September 30, 2015, during the Oktoberfest 2015 Promotion.

Homer plans to duck out of work and go on a tour of the Duff Brewery with Barney. At the brewery the two partake in free samples, Barney much more than Homer. Homer who has hardly had anything refuses to let Barney drive home after the tour since he drank enough to pass out. Wiggum in a Beer Stein costume, Eddie and Lou, who have been waiting outside the factory for anyone on the tour to drive away, pull him over and despite passing a sobriety test flawlessly he is arrested when Barney tells them to use the breathalyzer. 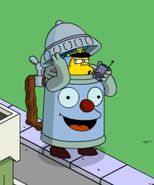 Beer Stein Wiggum In the Show.
Add a photo to this gallery
Retrieved from "https://simpsonstappedout.fandom.com/wiki/Beer_Stein_Wiggum?oldid=255703"
Community content is available under CC-BY-SA unless otherwise noted.