Country on the Inside

Gluttony: +10
The Beer-N-Brawl is a premium building released on December 16, 2014 along with the Level 48 content update. Upon completion, Lurleen is unlocked.

The Beer-N-Brawl is a local “hick bar” as Homer calls it, located in in Spittle County. the inside of the bar is full of residents of Spittle County who often engage in fist fights. The bar does not serve Duff Beer, instead they serve a local beer called Fudd Beer. Despite its popularity, Moe said he thought it had been banned "after all those hillbillies went blind". 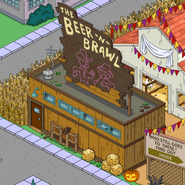 Beer-N-Brawl at night in the show.

Beer-N-Brawl in the morning in the show.
Add a photo to this gallery
Retrieved from "https://simpsonstappedout.fandom.com/wiki/Beer-N-Brawl?oldid=236154"
Community content is available under CC-BY-SA unless otherwise noted.