Beatrice is a limited-time premium character that was released on October 25, 2018, during Act 2 of the Treehouse of Horror XXIX Event. She is unlocked upon placing the Springfield Cursed Forest.

Beatrice is a girlfriend of the Squeaky Voice Teen Jeremy Freedman. While driving to Kozy Kabins, the Simpson family picked up these two hitchhikers. They later drop of Beatrice and Jeremy at a Tongue-Kiss Point, while the Simpsons head off to their cabin.

Beatrice Going for a Hike. 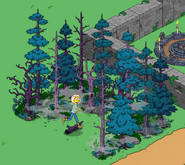 Beatrice Escaping the Forest.
Add a photo to this gallery
Retrieved from "https://simpsonstappedout.fandom.com/wiki/Beatrice?oldid=245518"
Community content is available under CC-BY-SA unless otherwise noted.