Asia de Cuba is premium building released on April 19, 2013 along with the level 28 update. It unlocks no new character.

It was offered with a rebate of 30 Donuts during Wave 1 of the Corporate Kickbacks rebate offers of the Season Premiere 2016 Event.

Asia de Cuba is a restaurant that Homer and Marge have dined at. It is known to be rather pricey. It is known that they serve roast beef and wine. Also it has a signature view of Springfield. They also have a buffet table and a chocolate fountain. 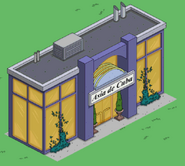 The building while is being used.
Add a photo to this gallery
Retrieved from "https://simpsonstappedout.fandom.com/wiki/Asia_de_Cuba?oldid=228532"
Community content is available under CC-BY-SA unless otherwise noted.