The Way I Wish We Was

Artie Ziff is a character released during the Level 45 update on September 17, 2014. He is unlocked upon placement of the ZiffCorp Sign.

Artie Ziff was Marge Simpson's boyfriend from 3rd-7th grade. He has attempted to get Marge to dump Homer for him and he often attempts to kiss her. 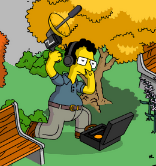 Artie Spying on Everyone
Add a photo to this gallery
Retrieved from "https://simpsonstappedout.fandom.com/wiki/Artie_Ziff?oldid=256992"
Community content is available under CC-BY-SA unless otherwise noted.