Making Sales of the City

Armistead's Mopeds is a limited-time building that was released on July 5, 2017, as part of the Pride 2017 Event. It is the second prize to be won in the event.

Armistead's Mopeds is a store located in Gay Neighborhood in Springfield. It sells Mopeds. Homer walked in front of the shop while looking for Julio and Grady's apartment. 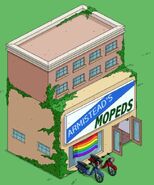 Armistead's Mopeds's animation.
Add a photo to this gallery
Retrieved from "https://simpsonstappedout.fandom.com/wiki/Armistead%27s_Mopeds?oldid=245878"
Community content is available under CC-BY-SA unless otherwise noted.