Archer Lisa is a costume for Lisa released on August 19, 2014, as the second prize for the Clash of Clones 2014 Event.

It returned on February 28, 2018 during theBart Royale 2018 Event. It was part of theRecycle Fort Bundle, only if the player didn't have it already.

When Lisa Simpson receives a bow and arrow set to get her to stop talking about the how Clash of Clones is glorifying war, she becomes Kat-Lisa Ever-Simpson. Based on Katniss Everdeen from The Hunger games.

The first 10 upgrades give an increase in earnings. After you reached the 10th level a message is shown that Archer Lisa can be leveled up 1000 levels further more. These bonus levels shall be visible for other players after the event.

Following amount of gold is needed to unlock the next bonus level of Archer Lisa:

*These totals are for a level 1 Archer Lisa, additional upgrades increase this number (see chart below). 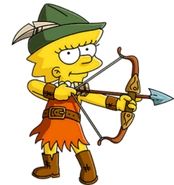 Archer Lisa judging people from above.
Add a photo to this gallery
Retrieved from "https://simpsonstappedout.fandom.com/wiki/Archer_Lisa?oldid=233786"
Community content is available under CC-BY-SA unless otherwise noted.