Getting Minds Into the Gutter

Alley McBalls is a limited time building released on July 3, 2015, during the Tap Ball 2015 Event. It was the first prize to be won in the Event's Act Two. It comes with the Alley's Well that Ends Well quest.

Alley McBalls is a store that sells bowling balls and merchandise. It was seen during a flashback to 2001, during the episode "Four Regrettings and a Funeral", where Homer was seen looking for a bowling ball. He eventually bought a blue ball by selling all of his apple shares. 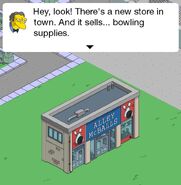 Add a photo to this gallery
Retrieved from "https://simpsonstappedout.fandom.com/wiki/Alley_McBalls?oldid=198777"
Community content is available under CC-BY-SA unless otherwise noted.