Akira is a premium character released on September 5, 2014, along with the Level 44 content update. He is unlocked upon completion of the The Happy Sumo.

He was part of a deal with the The Happy Sumo during the Black Friday 2015 Promotion.

On March 21, 2018 during The Springfield Jobs 2018 Event, he along with The Happy Sumo was a possible prize in the Asian Wonders Mystery Box.

Akira is the sensei of a karate dojo, a waiter at The Happy Sumo sushi restaurant (later Swanky Fish) and an employee at Costington's department store. 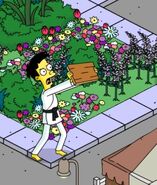 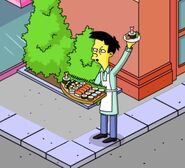 Akira in the show (Season 08, Episode 22 "In Marge We Trust").
Add a photo to this gallery
Retrieved from "https://simpsonstappedout.fandom.com/wiki/Akira?oldid=257357"
Community content is available under CC-BY-SA unless otherwise noted.