There Are Winners And Skinners

Agnes is a character released on May 10, 2013, along with the level 29 update. She is unlocked upon completion of the Skinner House. She is the first character in the Oldies Character Collection by level and she was also the first to be put in it as the category was created for her.

Agnes Skinner, more commonly known as Mrs. Skinner, is the strict and bitter mother of Seymour Skinner. She is very harshly controlling of Seymour Skinner, and treats him like a mother would a small child, once grounding him because he did not say who was at the door after answering it. She hates Seymour's choice in women, especially Edna Krabappel. Agnes has married a total of four times, once with Skinner's father, Sheldon Skinner, and following Sheldon's death she then married three more times, each time to a tow truck driver. Several Springfield residents (including the Simpsons) are afraid of her. 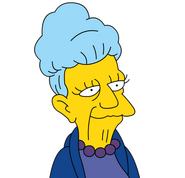 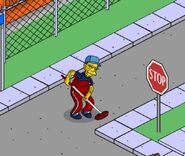 Agnes sweeping up the town. 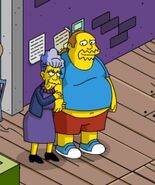 Agnes getting help crossing the street. 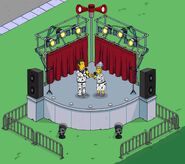 The Skinner Sisters performing at the Open Air Stage.

One of Agnes's random level up messages.

Agnes at the Simpsons House in the show.

Agnes dating Comic Book Guy in Worst Episode Ever
Add a photo to this gallery
Retrieved from "https://simpsonstappedout.fandom.com/wiki/Agnes?oldid=244606"
Community content is available under CC-BY-SA unless otherwise noted.