Abraham Lincoln is a limited-time premium character released June 28, 2013, as part of the 4th July 2013 Event. He is unlocked upon completion of Lincoln's Cabin, which cost 150 Donuts. He has been re-released for all subsequent 4th July events.

He was made available again on February 16, 2014, for President's Day.

Abraham Lincoln (or "Honest Abe") was the sixteenth president of the United States. In 1860, Mabel Simpson was trying to get Virgil to Canada. While on their way, Mabel found that they were on a "MISSING" poster, and that they would most definitely be found because of Mabel's large hair. When he sees their problem, Abraham Lincoln says she can use his hat to hide her hair, and when Mabel put it on, she asked how does she look. When Abraham said that she looks like a pot-belly stove, Mabel gives him a dirty look. After seeing her bad look, Abe defends himself by saying, "Hey, hey. Honest Abe." 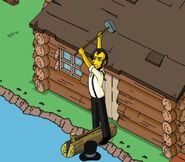 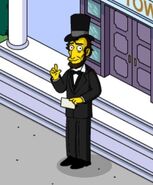 Abraham Lincoln giving a public address.
Add a photo to this gallery
Retrieved from "https://simpsonstappedout.fandom.com/wiki/Abraham_Lincoln?oldid=257191"
Community content is available under CC-BY-SA unless otherwise noted.